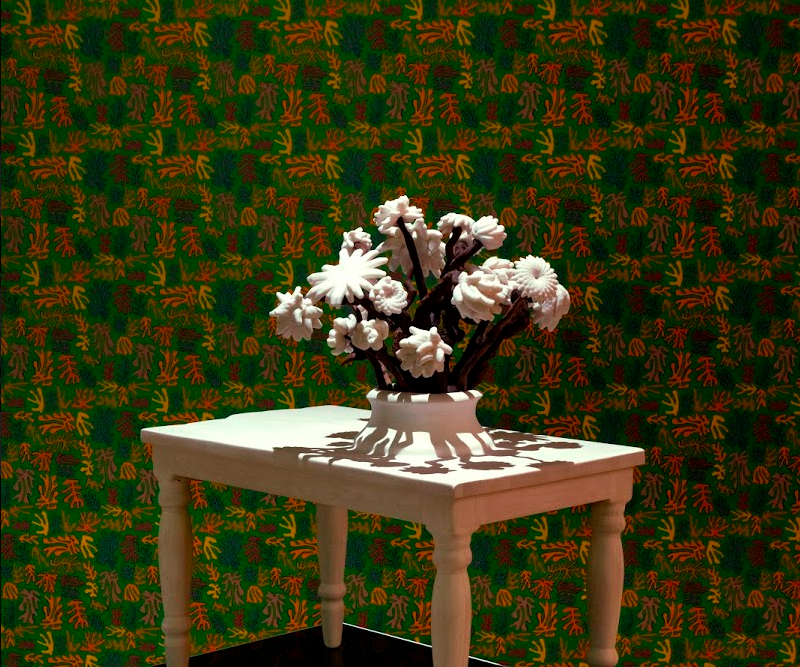 The Ruins implements still lifes, the classical form of a memento mori, to contemplate the decay of western civilization. In this exhibition, Hart revises the canons of modernist painting and the manifestos of failed utopias. Exhibited works are meditations on the flow of history, expressed as a cycle of decay and regeneration. The Ruins is an antidote to a world in crisis, navigating from a Eurocentric paradigm of fixed photographic capture into a reality of malleable and inherently unstable computer simulations and systemic collapse. The exhibition presents a different notion of time, a present that viewers experience through the possibility of simulation technologies that use scientific data to model natural forces, the crystallization of past, future and present into a perpetual now.

The Ruins , the central artwork from which the exhibition gains its title, is an audiovisual animation tracking through a claustrophobic game world from which there is no escape. As the three-channel maze unravels, Hart introduces her newest interpretation of still lifes—low polygon models. These models, hearkening to the idea of a poor copy or image popularized by Hito Steryl, are computer-made replications of copyright-protected paintings. Taken from works by Matisse and Picasso, patriarchs of the Modernist canon, these forms cover The Ruins in flirtatious copyright infringement. Copyright marks the beginning of Modernism as a response to the emerging technology of photography. Music composed by Edmund Campion furthers the ethos of modernism through the tactical mixing of failed Utopian ideologies: Thomas Jefferson On American Liberty ; The Bauhaus Manifesto by Walter Gropius; Fordlandia , Henry Ford’s failed suburban rubber plantation in the Amazon rainforest; and Jim Jones’s sermon, The Open Door . Campion has processed and mixed each recording read by the artist, using Hart’s voice as an instrument that serves as the soundtrack to both the animation and the exhibition itself.

The Still Life With Flowers by Henri Fantin-Latour exists as a three-dimensional sculptural object made from walnut, bleached basswood, and maple, with blossoms in burnished resin. It is a copy of a copy of a copy of a copy—and therein lies its unique character. Hart created this work first through production with a computer model, developed in fastidious imitation of the 1881 original. She then transitioned the digital rendering to a physical object with a CNC router and rapid-prototype printer. Later returning to the model, she dissolved the source into a low polygon model to be placed within The Ruins . Together in the exhibition, the poor copy and sculptural form incite an allegory on the passage of time, decay, and obsolescence.

The third component in The Ruins is Hart’s custom augmented wallpapers. Borrowing motifs that also appear inside her animations, the artist telescopes time and space from her virtual world to real life. Using The Ruins App , visitors can see animations embedded in the wallpaper that combine written allegories, animated abstract patterns, and heraldries of collapsed corporate empires, made visible only through the camera of a smart device.

The final part of this exhibition comes as a series of three monumental animations, The Orange Room, Green Table, and Big Red . In continuation of her study of copyright-protected twentieth-century painting, these video animations were prompted by the significant collection of the Art Institute of Chicago and her work there as a professor at the School of the Art Institute. Hart imports the compositional structures of The Red Paintings by Henri Matisse to propose a paradigm shift in painting practice, creating monumental animations at real painting scale. These works are constructed as images-within-images, architectures that open onto windows and doors, and lead into simulated landscapes bestowed with animated paintings, carpets and wallpapers. The digital, pictorial clockworks turn at different rates and temporal schemes to mesmerize viewers, ushering them into a state of contemplation.

The Ruins is live as a virtual exhibition for Mozilla Hubs, designed and supported by Matthew Gantt. It is featured in Ars Electronica ’s 2020 festival hub, along with a video interview with Claudia Hart about the project.