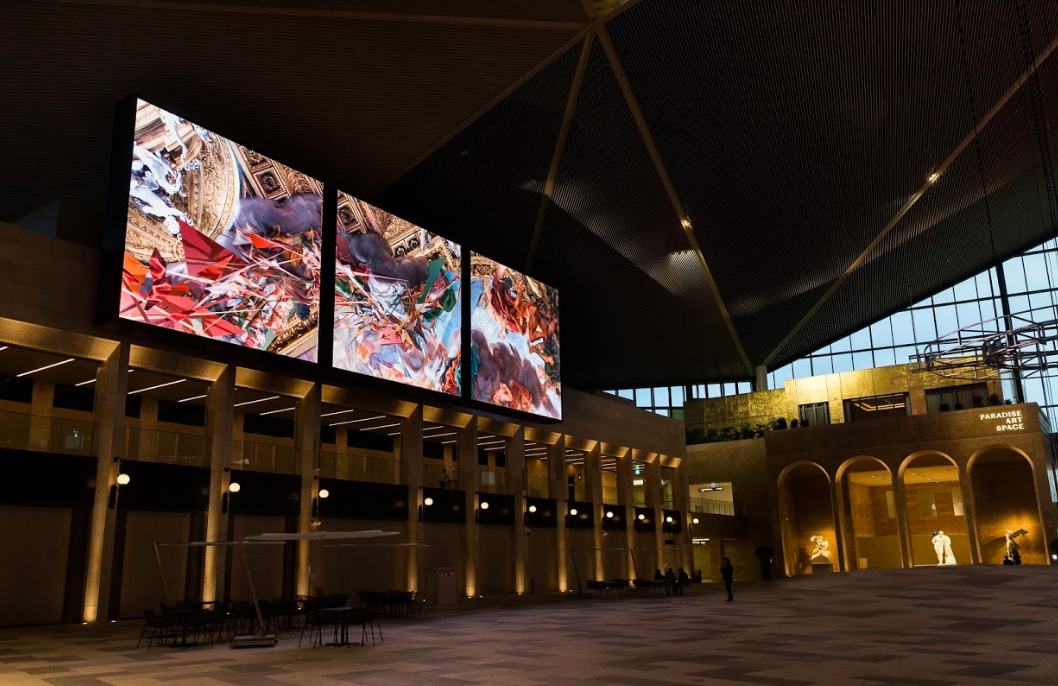 Niio is a digital platform that strives to educate difficult audiences and turn TV screens into creative canvases, inspiring people and communities all over the world.

The phone interview with the co-founder of Niio, Rob Anders, left me in total awe. “This is the future, I thought” – I still do. Just like Facebook in its own time, Niio is quietly disrupting the world order by taking art, with its elitist background and the baggage of misinterpretation, and bringing it to a medium familiar to all of us – the nearest TV screen. And that’s not even the best part – by working with TV manufacturers, Niio strives to create a setting where TVs will be sold with an already installed Niio moving image collection. After the trial period, you will be able to subscribe to the service with just a few clicks for a reasonable fee.

A model that can be simply summarized as “Netflix for the arts” does a few important things. First and above all, it empowers artists by providing the most advanced management tools to securely store, preserve, showcase, publish and display their digital works – always under their control, guaranteed to show as intended with full artist attribution at all times. The artistic community benefits from revenue obtained from subscriptions and from their artwork being exposed to previously unknown audiences. At the same time, consumer benefits of Niio are truly universal: it puts art in the everyday context of corporate buildings, hospitals, or your lawyer’s office. It also lets you “rent” pieces of art, enjoy them in the privacy of your home and have a profound experience without the noise and hustle of a museum setting. As a bonus, it turns your dead plasma TV screen into a creative canvas. If it’s an office setting – it elevates your corporate space.

Most importantly, all of this is done seamlessly – in more than one way. There are several business models tailored to different audiences: from subscription to collection and loans of limited-edition pieces. Niio itself is easily accessible and playable on any required hardware, including any type of screen (not just TV), projector, VR helmet or virtually anything else you can think of. To make sure all of these efforts are not lost to the subjectivity of taste, the breadth of curated offering appeals to different types of audiences – from sophisticated collectors appreciating deeply conceptual and abstract works to those at the beginning of their art exploration, drawn to more visual aesthetics.

For me digital is about having an entry point – once you got people interested through a medium they’re already familiar with, you can help them explore. Tell them the artists’ story, stimulate them to take one step further –  maybe even into the offline world of art.

Let’s start with the basics – what does “Niio” mean?

There are a few things to it, actually! On the one side you have the suffix “neo” in different movements like neoliberalism, or neoclassicism. And then there is Neo from The Matrix and I think his character sums up really well what we stand for. It’s under that bridge between being accepted and credible within the traditional art world but being kind of cool and revolutionary. Maybe it’s a little bit of a twist on The Matrix but it’s about enabling people to plug into a meaningful and positive alternative framework. When you look at the logo you have the tilde symbol stand for letter “n”, representing all things everlasting. The double “i” and the “o” could either be pause and stop signs, or digits. The idea was that when you look at it, you don’t know that it’s Niio – and that was our conscious choice of voice for branding. We don’t want to be pure art, but we want to be acknowledged and loved by the art world. The logo is really our symbol, philosophically speaking. It could be horizontal or vertical, it could be abstract or make up a word. That’s what we do – we fit into different industries and connect people in an interesting way. I’m about to get the logo tattooed – that’s how meaningful it is!

I ask Rob about the mission of Niio but get much more – a thoughtful insight into the correlation between issues that are on the front burner for our society and the art industry.

It’s not an evolution we’re going through – it’s a revolution!

Most people, even people within the tech world, totally underestimate what the impact of the fourth Industrial Revolution is, and the impact of AI in particular. It’s not just a technology that enables you to do something better, it’s something that poses a direct and immediate threat to the world order. Just like it is told in The Great Hack by Netflix, manipulating people through big data and social media is not rocket science, and it can have a huge impact on the political and social structure of the world. There is another side to it – the notion that 70 or 80 percent of the workforce as we know it is subject to change through emerging technologies. I believe we have to bring responsibility and meaning into this ongoing revolution and work on a paradigm shift. Now, in the times of unprecedented levels of digital noise, we need to create a positive digital experience which enables you to just pause and reflect for a moment. For me all this comes together in art, and the world definitely needs that respite.

Isn’t the concept of digital-everything robbing us of imagination and other pre-technology skills?
Digital is a medium most relevant not only to artists. It resonates with the broadest possible audience, including the people who didn’t have an art education and are intimidated to start. Digital can reach them through screens, which is what they’re used to already, it enables them to access art seamlessly. For me it’s about having an entry point – once you got people interested through a medium they’re familiar with, you can help them open their eyes and explore. You can tell them the artists’ story, stimulate them to take one step further – maybe even into the offline world of art.  The mission of Niio is to expose people to art, inspiring entire communities through meaningful digital experiences. That fascinates me every day – that one can alter the course of events, at least a bit.

It’s true that technology often alienates people instead of bringing them together, but I hope that we are creating a meaningful community of artists and people who want to experience their work. The outline of a modern city is totally screen-based, which creates a great opportunity to do that. There is no doubt that our behavior as humans constantly evolves – that’s amazing, isn’t it? If anything, the digital world will build momentum – it’s not going backwards. It’s not an evolution we’re going through – it’s a revolution! But it’s up to us how we treat those changes and what we do with them.

I’ve always been interested in people, technology and the interaction between the two. At the earlier stages of my career I was looking for industries that are going digital and looking to be the evangelist that is building businesses to bring that change into life.

How wide is the reach of Niio right now?
Alongside 4000 artists and galleries, we have 11 000 artworks on the platform. We have powered the video and media art shows around the world, and have been selected by world’s leading hospitality companies like Marriott (for 300 hotels), Crowne Plaza, Hilton, Mandarin Oriental , as well as premium co-working locations and leading real estate developers across the US and Asia to showcase curated art across their spaces. Given the foot traffic across these types of public locations, and that in some cases we are talking about huge installations, such as across entire buildings at Victoria Harbor, overlooking Hong Kong, we know that millions of people have already been exposed to a Niio Art Experience and we are only just getting started.

That’s impressive. What does the future hold, then?
Look at the number of screens in our world! They are getting bigger, thinner and better quality. They are an integral part of interior design – and yet people are still left with these black holes on the wall. Screen manufacturers who are driven from a business perspective are not making money on their hardware, so they’re looking for the service and content offering. At Niio, we believe that their screens should become our creative canvases when they’re turned off. Recently I’ve spent a lot of time in Asia developing strategic relationships with tier-1 manufacturers to make it a reality that when you buy a TV set it comes with an integrated Niio program and an initial subscription which you can later renew for a small fee.  Those are the type of drivers that will eventually make things stack up. It’s not going to be people waking up tomorrow morning and saying that they want to have art on their TV screens… gradual expansion through seamless offering has always been our game plan.